Many reviews are written by experienced musicians, and it is great to have an individual with such a wealth of experience describing the particular attributes of the mouthpiece or saxophone in question. I on the other hand am not a hugely experienced saxophone player, and I don’t have a long list of equipment I’ve tried or owned to draw upon to help identity the strengths and weaknesses of a particular mouthpiece for example. So you might be wondering why I should be writing this review?

Well, I’m at that stage where I’ve moved on from a standard beginners mouthpiece and have an idea of the tone I’m looking for, but still need my set-up to help me develop, not stamp it’s personality on me. So hopefully this review might be helpful for anyone in a similar position.

I was looking for a mouthpiece that would help to me achieve a tone that was not too dark, not too bight, rich sounding but not muddy, something with a nice edge but not like a laser beam. I guess I was looking for a wide tonal palette that I as a player could direct and control.


For a matter of clarity I should state my sax playing experience. I started playing the alto 3 years ago in June 2007, I didn’t get a tenor until December 2008 and didn’t play that as my main sax until after I’d passed my grade 5 on the alto in March 2009.My experience of tenor mouthpieces is limited, a Yamaha 4C for a few days then a Jody Jazz HR 7* for several months before finding the Vandoren Java T75, which has been a solid performer for the last 10 months. If you’d like more info, you can read my “Beginners’ Diary”.​

​
This review is based on my experiences of the PPT 7* over the last three months I’ve owned it. As a guide I probably spend 7 to 8 hours a week practicing and I also attend a 1½ hour swing band rehearsal each week.

​
On with the review:

When the PPT first came out it was in dark blue, which didn’t really appeal, then came the Onyxite and then I thought I should have got the blue after all! I decided that if and when I order, I would probably see if I could get it in a custom colour, black! Oh dear how conventional I am!

As time went on that niggling desire to see what a custom hand crafted mouthpiece played like became quite an itch, could it be better than my current piece? As a few more of Pete’s sound clips came out and I read and re-read Pete’s explanation of the idea behind the design I found it increasingly difficult to put the temptation to one side. At the point of ordering I contacted Pete explaining my current set-up and asking which tip opening he’d recommend, I was thinking the 7* but wondered about the 8*, the advice came back to try the 7* and so that was what I ordered. Not only that but the Onyxite finish had grown on me to such an extent that I didn’t even inquire about the possibility of a different colour.

My mouthpiece arrived in about six weeks, which was about what I was expecting. The mouthpiece was well packaged in a plastic bag, inside a stiff cardboard tube with end caps, which was stowed safely inside a jiffy bag. I knew to expect it as I’d had an e-mail from Pete telling me it was on its way. 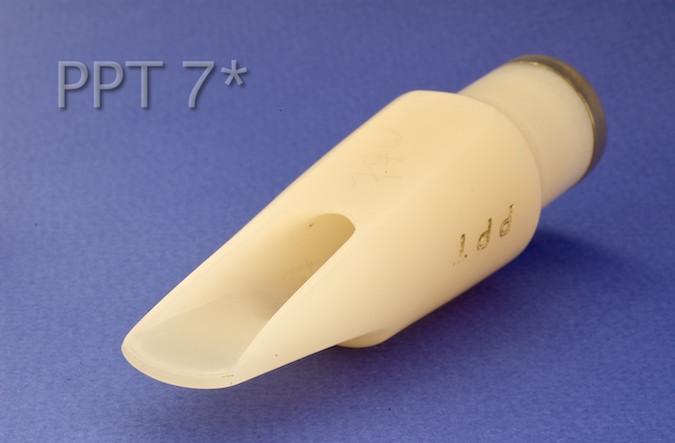 The PPT is pretty much the same height as the Vandoren Java, and the same bore diameter so there was no need to adjust the cork or wrap Teflon tape around to get it to fit. Although I initially thought they were quite similar in both the internal and external shape, they are actually quite different. The interior of the PPT has a notable baffle that is smoothed into a ‘bullet’ shape, which drops down and opens out into the chamber. The beak and table angle differ quite a bit as well and the other noticeable difference is that the width at the tip of the PPT remains narrow for longer before fluting out into the main body of the mouthpiece.

​
The Onyxite material warms up very quickly, probably faster than hard rubber but I’ve not put a stopwatch on it. It’s also very comfortable in the mouth, although it did take me a few days to get used to the slightly narrower tip width. 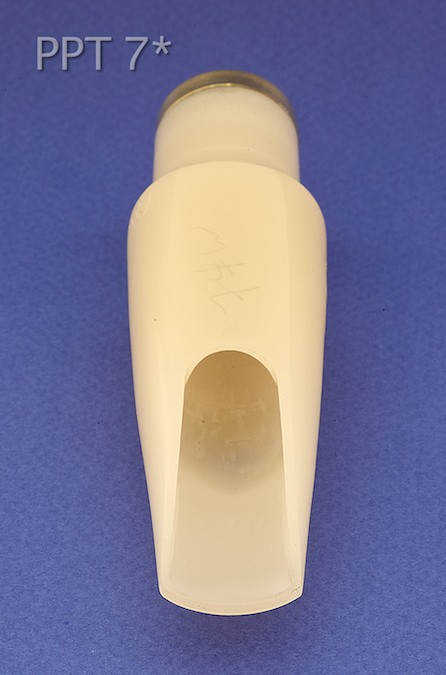 Overall I’d say the tone is slightly more focused than the Java and much more even across the range of the sax. Don’t get me wrong the Java is a good mouthpiece but the PPT 7* is in a different class. The other thing, and please forgive the car analogy, I’m not really a car person but, there is that reassuring feeling, similar to driving a powerful car, that when you choose to put your foot down, it will be ready and take off.

PPT is free blowing but has enough resistance that I feel like I’m in control. This makes the playing great fun as I can easily jump around without feeling like I needed to over compensate for any note. Whether or not it’s because of this evenness but the tone from note to note is very consistent and I feel my intonation is better as well.

The low notes are smooth, and I can be quiet and soft with them, an area I struggled with the Java. The palm notes are tighter and more tonally cohesive. I feel the best word to describe it is: malleable, push it and it brightens up with a nice crispness, but it is not thin sounding as it retains an underlying solid texture to the tone. When eased back it mellows out but still with definition. The enjoyable bit is that the PPT 7* goes where I point it rather than it stamping it’s own tonal signature on my playing.

I’ve been able to vary the dynamics in the middle of the saxophone’s range reasonably well for a while, but it’s not always been so easy at top or bottom. I still have to concentrate a bit more at the top and bottom but I’ve noticed an increased freedom with my dynamics across the whole range of the horn. It became quite enjoyable to see how quietly and softly I could get the lower notes to speak.

I do have two niggles with the mouthpiece, first is that due to the pale nature of the Onyxite lining up the reed tip in poor light takes just a bit longer. The second niggle is finding the right ligature, the Rovner Light (L8) I used first needed a shim to support the reed at the front, it was not a big deal but a bit of a pain when I dropped the shim at a band practice. 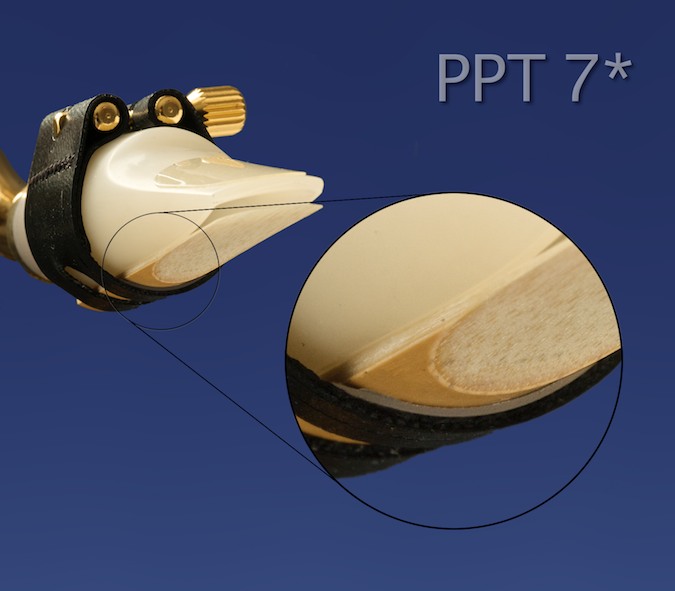 The Vandoren Optimum really wasn’t a good fit for me, but I’ve heard from others that it’s a great fit on their PPTs. At the moment I’m using a Rovner Versa (which was the Eddie Daniels) and this seems to working out well, the bands at the front are still not taught but I think because of the metal bar running the length of the reed it manages to supports it without a problem. 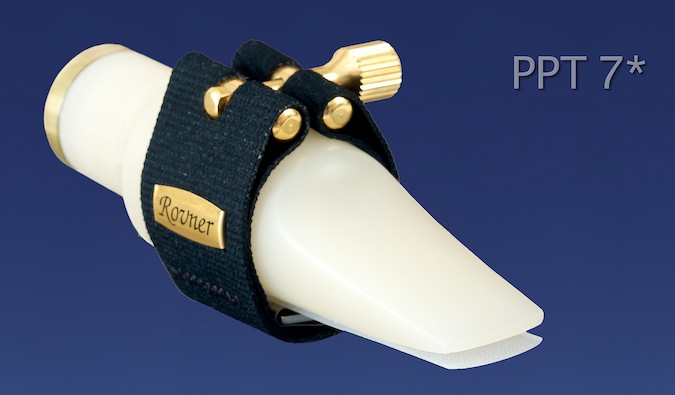 I’ve not regretted once getting the PPT 7*, it’s been the only mouthpiece I’ve played on the tenor since getting it, the Java having been stowed away in it’s box. I feel I have a very nice and incredibly versatile mouthpiece that’s been well thought out and performs exceptionally well. I’ve been comparing it to a Vandoren Java because that’s all I have to compare it to. Am I comparing like with like? Probably not, the design of the PPT has I think a few unique design ideas from Pete Thomas and Mr Pillinger that makes it stand on it’s own. I was looking for a flexible mouthpiece that will grow with me as I grow as a musician, I think I’ve found it.

If you happen to be looking for a well thought out, well made tenor piece then I would, without hesitation, suggest you consider the PPT. The fact that the profits from these mouthpieces go to charity of course makes these even more special.